Parents who want to start Montessori from birth aren’t really sure where to start. And they do want to learn about how to implement Montessori with their newborn at home. But honestly with newborns it’s really easy. They can’t really do a whole lot yet. But do not underestimate what their brains are capable of. So from one busy parent to another, today I’m going to talk about how to implement Montessori with newborn (0-3 months babies) at home. 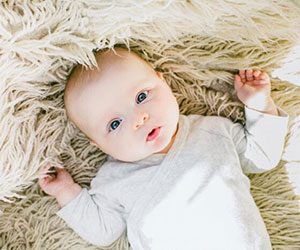 Doing Montessori with your newborn is actually really easy. There are just some simple things that you can do right from the get-go, such as making sure that your baby has lots of face time with you. Babies like to look at faces. They can’t see very far away, usually only about 30 centimeters or 12 inches. But anytime that you spend looking at your newborn face to face close is great for their brain development. You can also offer them lots of tummy time by putting them face down on a blanket, encouraging them to look up and develop their neck muscles.

Starting around 4 weeks old, newborns also develop the ability to start tracking an object that’s held in front of their face. So you can practice doing that with your child. Perhaps one of the easiest things that you can do that does fall in line with Montessori philosophy, is simply talking to your newborn. Most people think “well, they can’t really understand what I’m saying”, but that couldn’t be further from the truth. Though they can’t really understand your words, they do pick up on tones and emotions right from birth. So if you’re talking to your child, anytime you’re doing anything with that – this could be something like changing a diaper or giving them a bottle or nursing them. Or if you’re simply just spending time cuddling with them, talking to your newborn is one of the best things that you can do for language development right from the beginning. From a Montessori perspective, it’s also helpful if you talk to your child about what you’re doing with them. For example, as you’re changing their diaper, you can say “okay we’re gonna lift up your legs now, here we go we’re wiping your bum” and things like that. The reasoning behind that is to show respect. Now that might sound silly to some of you guys, showing respect to a baby. But that’s exactly what Montessori is after – is treating your child with respect from as early as birth. 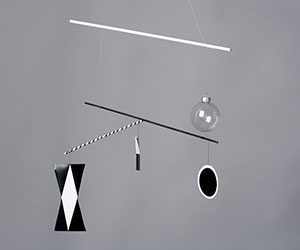 So starting at 3 weeks old, you can implement Montessori Mobiles with your newborn. There are a series of sequential Mobiles that you’re supposed to introduce in a certain order. That’s based on your child’s actual physical development. When babies are first born, they cannot see color. They typically tend to focus on things that are black and white or high contrast. And again they can’t see very far in front of their faces. It’s usually about 30 centimeters or 12 inches, which is roughly the distance from the breast to the face. So the mobile that is typically introduced first from 3 to 6 weeks old is the Munari Mobile. This one is composed of entirely black and white geometric shapes, including linear shapes and curvilinear shapes as well as a simple glass ball. The Munari Mobile is very specifically measured out. Everything is balanced off of the size of the glass ball. The one you’re seeing here is a 70 millimeter glass ball. The black and white circle that’s also on the mobile is also 70 millimeters. And the other shapes that are included on the mobile are measured in a very specific ratio to the size of the glass ball and the circle. This mobile is meant to be hung where there is not a lot of airflow. So that even the slightest little bit of wind from a breath makes it move ever so gently. It’s intended to be hung roughly 30 centimeters or 12 inches above your child’s line-of-sight. This high contrast mobile not only attracts your newborns attention, but it helps them to develop their new sense of visual tracking. As they follow the objects around as they move, and perhaps more importantly they’re also able to develop their ability to focus. In the world of Montessori, having your child be able to focus on one activity at a time – is something that is really emphasized. So starting from birth, introducing this mobile allows your child to develop that sense of focus, as they watch the objects move around ever so slowly. Now at first your newborn might not pay attention for more than a couple of minutes. But as they get older, you’ll notice that their ability to focus on the mobile. It does increase now.

If you do decide to start using Montessori Mobiles with your child like I said. This is just a first in a series of mobiles. I will be influencing each of the mobiles with my newborn as she is ready for them developmentally. So all above is tell you parents how to do Montessori activities for newborn at home, hope it will be helpful for you.

How to Be a Good Parent: 15 Tips
The Truth About Bike Trailer for Kids
How to Collapse a Bob Stroller
12 Important Things For Buying a Stroller
6 Work-Life Balance Tips for Parents
8 Best Infant Monitors to Secure Baby Safety

3 thoughts on “Montessori Activities At Home: for Newborns (0-3 Months Babies)”